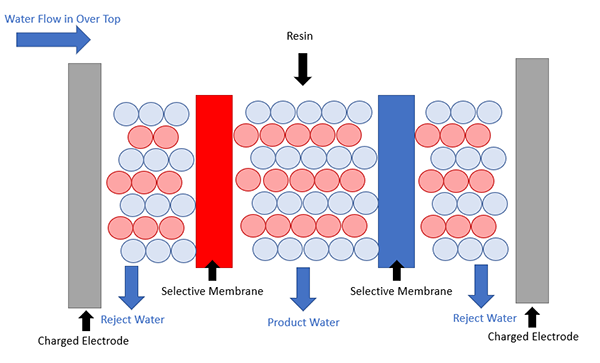 CEDI (Continuous Electrodeionization) can be a plausible alternative for traditional DI tanks. Electrodeionization works by electrodes being placed on opposing ends of the unit and creating an electrical current to drive the cations (positive ions) and anions (negative ions) in opposing directions. Between the electrodes, membranes made of selective resins are sandwiched in. This blocks the flow of undesired ions and water molecules creating alternating compartments of reject water and product water.

Product water will continue in the process with ion concentration reducing to the parts per trillion. The process can be designed for the recycling of reject water or draining, depending on user needs. This stream will have 10-20x higher ion concentration than the initial feed water.

One of the large selling points of CEDI is the unit’s ability to self-regenerate. The purified compartments become concentrated and when the localized voltage potential increases enough, water is split into Hydrogen and Hydroxide molecules, essentially an acid and caustic. These ions can then replace other trace ions due to the higher affinity of the resin beads and result in a regenerated resin and allow for consistent and constant deionization through the unit.

CEDI is considered most often in processes where the frequency of DI tank exchanges is not conceivable, or a local DI provider is not available. CEDI has a substantially higher capital cost than traditional DI tanks, but the operating cost is much lower.

Next post
Have an Older Aquafine UV Unit? Contact Us!
Manage Cookie Consent
To provide the best experiences, we use technologies like cookies to store and/or access device information. Consenting to these technologies will allow us to process data such as browsing behavior or unique IDs on this site. Not consenting or withdrawing consent, may adversely affect certain features and functions.
Manage options Manage services Manage vendors Read more about these purposes
View preferences
{title} {title} {title}