I enlisted in the Marines in the Fall of 1977 while a senior in high school.  Prior to the end of the school year and shipping out for San Diego, I was awarded an NROTC scholarship.  I applied to the University of Minnesota and was accepted.  I completed my degree requirements in the Spring of 1981 and was commissioned as a 2nd Lieutenant in the United States Marines.

As a new 2nd Lieutenant I completed “The Basic School” as well as the “Infantry Officer’s Course” in Quantico VA in 1981 and was assigned as a platoon commander in Golf Company, 2nd Battalion 7th Marine Regiment homebased at Camp Pendleton, CA.  While with 2/7 I served as an Infantry Platoon Commander, Weapons Platoon Commander, Dragon Anti-Tank Missile Platoon Commander and Infantry Company Commander.  Highlights of this tour were two West Pac deployments to Okinawa, Korea and the Philippines, as well as joint exercises with the Canadian Armed Forces in the Aleutian Islands, completion of the USMC Mountain Warfare Training School and Cold Weather Operations Training School at Bridgeport CA, Korean Marine Mountain Warfare Training School in Pohang, Korea, and Jungle Environment Survival Training in the Philippine Islands.   In April 1984 I also was named Captain of the 2/7 Rifle Team which one the 3rd Division Matches in Okinawa.

In 1985 I was assigned as the Executive Officer for Marine Corps Recruiting at Recruiting Station Minneapolis, MN.  I was promoted to Captain during this tour and served in this capacity until late 1988. 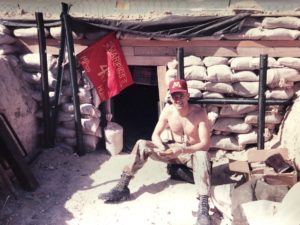 I left active duty in November 1988 and joined the local USMC Reserve Unit, a Military Police Company.  In October of 1990 this unit was activated and deployed to Saudi Arabia as part of Operations Desert Shield/Desert Storm.  Once “in-country” my platoon was reassigned to the 8th Marine Regiment and participated in the ground attack to liberate Kuwait from Iraqi forces.  I returned to the USA in June 1991.

In 1993 I was promoted to the rank of Major. I left the Marines the final time in 1996, receiving an honorable discharge.

Did you know that we are one of the biggest veteran owned businesses in Minnesota?