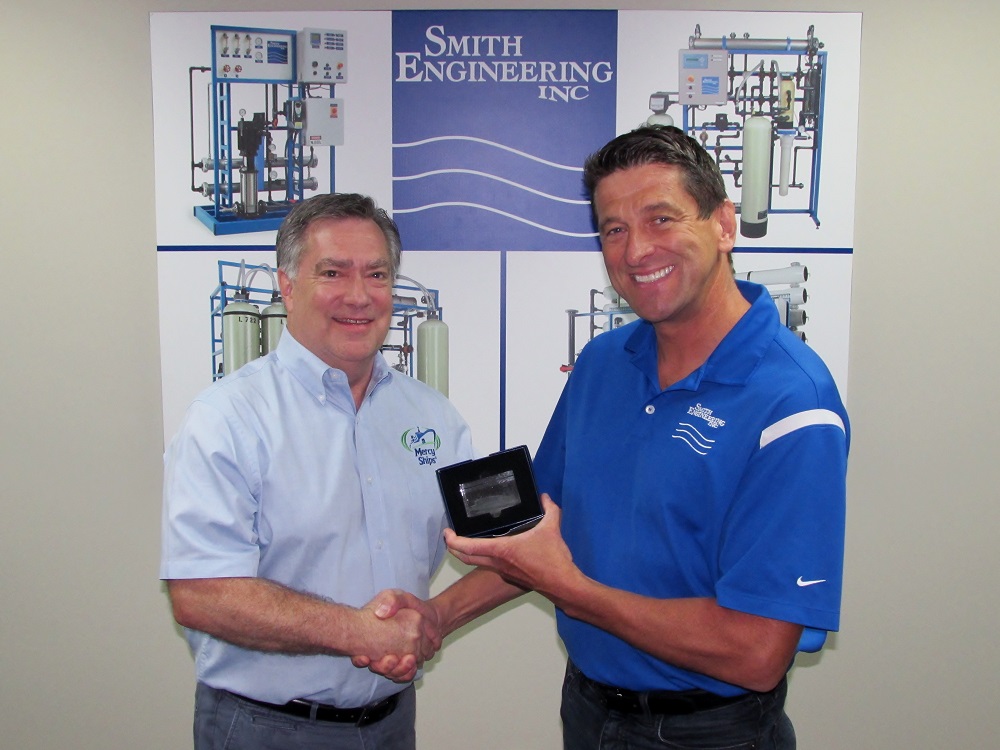 Smith Engineering was honored to receive Mercy Ships Director of Corporate Relations, Bobby Baker.  Bobby was in town to participate in our First Annual Charity Golf Tournament on August 11th.  The golf event was established to help raise money towards the water treatment system that Smith is manufacturing and will be installed on the new Mercy Ship now under construction. The water treatment system will provide purified water for all the labs and surgery rooms aboard the new ship.

Bobby shared with us many interesting facts about Mercy Ships. In the past 12 years, Mercy Ships motto has been to teach and train. Nationals spend 10 weeks on board training and taking courses to prepare them to carry on providing safe health care long after the ship departs. Lack of access to safe surgery is the biggest killer on earth, killing more people than any disease including cancer.

This is the first time Mercy Ships has built an entirely new ship in its 39-year history. The Anastasis was the original ship purchased in 1978 and the Africa Mercy purchased in 2007, both are refitted ships. Mercy Ships receives donations from 450 companies worldwide such as GE, Thermo Fisher, and Johnson & Johnson to name a few.

Mercy Ships operates with very little overhead. All the ship’s staff are volunteer; there is no payroll.  One would think this would be a deterrent in finding good help; but in fact, there is a 2-year waiting list for volunteer physicians.

To prepare a dock in a new nation an advance team sets out about six months beforehand. The team reaches out to the government, churches, and media. Even before this happens, Mercy Ships meets with the president of the nation and receives a signed agreement that the nation will provide a port and fresh water and basically, “no hassles.” The floating hospital is turned into a “hope” center.

The Canary Islands is their home for dry dock. Every two years they dry dock for maintenance. During maritime there are approximately 500 people on board as compared to 1200 medical staff when at port. Once arriving in a nation, within 24 hours eight to nine thousand people are screened and placed in a queue for medical help.

The ship is a floating city complete with a Starbucks! Families, couples, and single volunteers live on board. Approximately $80,000 worth of coffee is donated by Starbucks and provided on board to the crew for 25¢ a cup.

We asked Bobby how he chose to work for Mercy Ships. His reply was, “It chose me.” In his late twenties, Bobby was a young businessman climbing the corporate ladder. He was very successful but wasn’t necessarily happy with his career. He and his wife regularly donated to Mercy Ships. As a businessman, Bobby was interested in Mercy Ships’ low overhead. He began learning more about Mercy Ships and became friends with their leadership. He got, as they say, “too close to the fire.”  He felt a calling he could not ignore. Bobby and his wife sold their home in Houston during one of the lowest markets of the time and packed up their two little girls. He was leaving a good paying job for a job with no salary.  Many of his friends and family thought he was crazy. He was running on faith.

Bobby was instrumental in scouting out the Cape Town, South Africa location. He became friends with the president and other government officials, as well as church and business leaders. Mercy Ships was the first non-profit that was issued a 501c3 status (exempt status) in the New South Africa (the new constitution of 1996).  His two oldest daughters grew up in Africa. Bobby and his family also lived on board the ship for two years. After 13 years with Mercy Ships, Bobby and his family moved back to Texas where he worked outside of Mercy Ships for 10 years. Then, four years ago, Bobby heard about their endeavor to build a brand-new Mercy Ship and he felt it was time to return. Bobby has been back at Mercy Ships and working as the Director of Corporate Relations and loving every minute!

The selfless work of Bobby and the Mercy Ships volunteers is what inspired Smith to raise money in attempts to provide the water filtration system free of charge. Thanks to the success of the golf event (over $12,000.00 raised) we are now a third of the way there. That’s $70,000.00! While Bobby was in town, he honored Smith VP of Operations, Bob Lucas, with a limited-edition award displaying the newest Mercy Ship etched in 3D. Lucas’ heartfelt desire to fund the water treatment equipment for Mercy Ships earned him the honor.

Join Us at The Cleanroom Qualification and Water System Design Conference